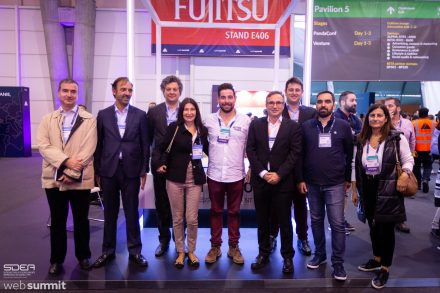 Lisbon, 22 November 2019 – Portugal Ventures has strengthened its commitment to entrepreneurship in the Autonomous Region of the Azores by investing in three new startups – Azores Touch, Cereal Games and Yara Pets, corresponding to a total investment of EUR 800 thousand.

The Azores Ventures Fund, which is co-funded by the Regional Government of the Azores, aims at filling the market gap in the Azores by giving impetus to innovation and entrepreneurship projects, as well as boosting job creation and the competitiveness of businesses in the archipelago. The Fund was created by Portugal Ventures, in partnership with the Regional Government of the Azores and the Azores Business Development Society (SDEA), and has already invested in two startups since being established. It now adds two more startups to its portfolio – Cereal Games and Yara Pets.

For Sérgio Ávila, vice-president of the Regional Government, “the policy of successively investing in startups based in the Azores, through specialised venture capital entities, shows that the Azores entrepreneurial ecosystem and our entrepreneurs are growing, and are leveraging the new financial instruments available. Leveraging venture capital in startups today is key to attracting investment because the world economy is changing, and we have to adapt. The government will always support entrepreneurs. I wish both companies every success and hope they continue to believe in the favourable environment we have created in the Azores for business development.”

Portugal Ventures also added to its portfolio in Portugal’s most dynamic economic sector, tourism, by investing in Azores Touch, through its Turismo Crescimento Venture Capital Fund. This investment also reflects the increase in the indicators of demand for the Azores region as a tourist destination, encouraging the emergence of more innovative projects for the sector.

Rui Ferreira, Executive Vice President of Portugal Ventures, says that “these new investments are the result of Portugal Ventures’ commitment to the Regional Government of the Azores to strengthen ties with the archipelago’s entrepreneurial ecosystem, to identify projects and invest in the creation of innovative companies in the Autonomous Region of the Azores that create jobs for qualified human resources and are considered strategic for regional economic development”.

These three investments,  in projects that will most certainly affect change in the region, are the result of the work Portugal Ventures has been carrying out in close cooperation with all its regional partners. The investment in Azores Touch demonstrates the synergies Portugal Ventures creates as the managing body of sectoral and regional venture capital funds, and reinforces our strategy for projects in the Tourism sector, which is aligned with the government’s priorities, thereby boosting Portugal’s position as Europe and the world’s most attractive tourist destination.

Brief description of the new startups invested in as a result of Call Azores:

Azores Touch, founded in 2016 by Sérgio Cota, aims at offering the best experience possible to those who visit Terceira and Graciosa islands, from the moment they arrive and until they leave. Its mission is to facilitate access to all services and activities available on the islands, providing unforgettable experiences for holidaymakers by offering contact with nature, culture, history and the locals.

Cereal Games was founded in 2014 by Lazarus Raposo. The company specialises mainly in the development of serious and educational games. It has developed several games using technologies such Augmented Reality, mobile devices and the Internet of Things (IoT) to meet the demand of local authorities, schools, museums and scientific observation centres in the region.

Portugal Ventures invests in Revault, a cybersecurity company based in the Azores

“Portugal Ventures 10 years on – Celebrating the past, emphasising the present, looking to the future”

Portugal Ventures launches 2nd edition of Call INNOV-ID to invest in sustainability, circularity and decarbonization of the economy